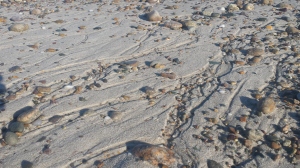 While walking along a pebbly beach at low tide, my eye was captured by the paths left by little rivulets of water running back into the ocean. When I was a child, I loved to imagine what it would be like to be tiny, surrounded by other tiny things that would in fact seem gigantic to me! Imagine these little paths in the sand as deep canyons cut by rushing rivers of water, strong enough to carry along large rocks and boulders. How would this landscape look to an ant, if it had the brain capacity to even think about such things? Smaller tributaries come together to form larger and larger streams and rivers, always finding the path of least resistance in the never-ending pull down. Water follows the rules. Whether a few drips, a puddle coming from a leaky hose, a flooded street after a rainstorm, or spring snow melt flowing down the mountainside, water always flows down. You can tell where the nearest low spot is by where the water gathers.

Now imagine a photograph of earth from space.  I’m sorry that I haven’t been able to make that trip to take a picture for you, but I know you’ve seen one! Think about this.  Does water really flow down, or does it actually flow in? Water follows the rule of gravity, and what seems like down to us is really just in towards the center of the earth. But what about springs? Don’t they flow up (or out, depending on your perspective!)? Straight from the USGS site, “A spring is the result of an aquifer being filled to the point that the water overflows onto the land surface” (http://water.usgs.gov/edu/watercyclesprings.html).

Twice in Jeremiah, God is referred to as the spring of living water (Jeremiah 2:13, 17:13). Then in John 4:10, Jesus tells the woman at the well, “If you only knew the gift God has for you and who you are speaking to, you would ask me, and I would give you living water.”

Is your heart thirsty? Spend time with your Creator, who knows you inside and out. Read His Word, the Bible. Talk to Him, and listen for His voice. Ask Him to fill you with His living water. Let that living water flow in. Later on in John, Jesus tells the crowds at the Temple,

Anyone who is thirsty may come to me! Anyone who believes in me may come and drink! For the Scriptures declare, ‘Rivers of living water will flow from his heart’ (John 7:37-38).

When we drink deeply from the living waters, the aquifer of our heart becomes filled to overflowing. Then we are able to share that living water with others, as it flows out in springs and rivers.