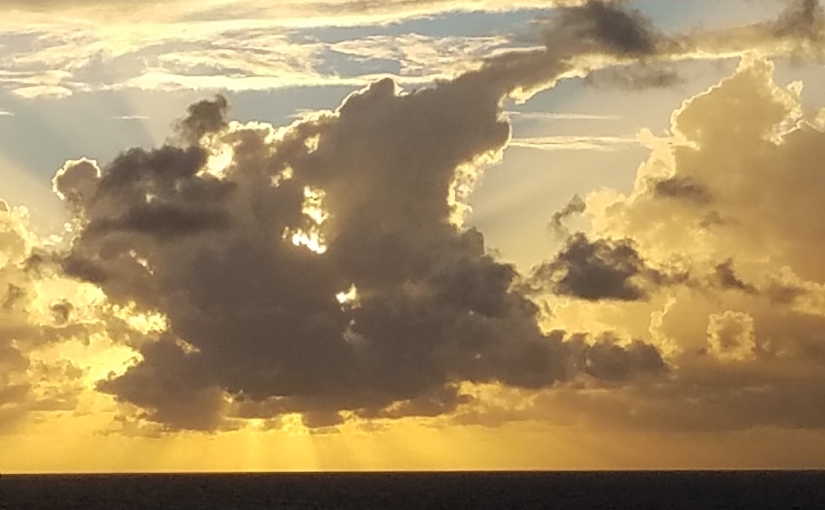 My husband and I were amazed to witness this sunset a few weeks ago. The changing view was mesmerizing, but what really caught my attention were the rays of light streaming from behind the clouds.

I’ve always been drawn to these streams of light. Seeing them pierce through the tree canopy to brighten a small patch of forest floor, watching dust particles float in the beams coming in through a sunny window (I’m sure your home has no dust whatsoever, but I can’t say the same!), and watching them burst forth through a break in the clouds on a stormy day all bring me a sense of peaceful wonder. They seem to shine so straight and true from their source!

Looking at those light beams makes it seem as if light travels in a straight line, and is stopped short when something gets in the way, or redirected when reflected off something shiny. We only see those beams beneath the cloud because the cloud itself caused interference! But do a quick bit of research on light, and you’ll find that it’s much more complicated than straight beams of light energy shooting from the sun.

In a few days we will celebrate Christmas, a time to remember when the Light of the World came clothed in human skin. When his cousin John the Baptist was born, John’s father prophesied about Jesus,

“Because of God’s tender mercy, the morning light from heaven is about to break upon us, to give light to those who sit in darkness and in the shadow of death, and to guide us to the path of peace.” (Luke 1:78-79)

In his gospel, the apostle John wrote about John the Baptist,

“John himself was not the light; he was simply a witness to tell about the light. The one who is the true light, who gives light to everyone, was coming into the world.” (John 1:8-9)

Jesus is the Light of the World. Are you searching for truth? It won’t be found in darkness. Come into the Light!

Light illuminates, but that’s just something it does. That’s not what it IS. As we come into the Light of Christ and set our hearts on Him, we soon learn that He is so much more than the Light of the World! Just as light beams from the sun are much more complex than they seem, Jesus will never run out of ways to amaze and delight us.

Come into the Light!

“The Word gave life to everything that was created, and his life brought light to everyone. The light shines in the darkness, and the darkness can never extinguish it.” (John 1:4-5)