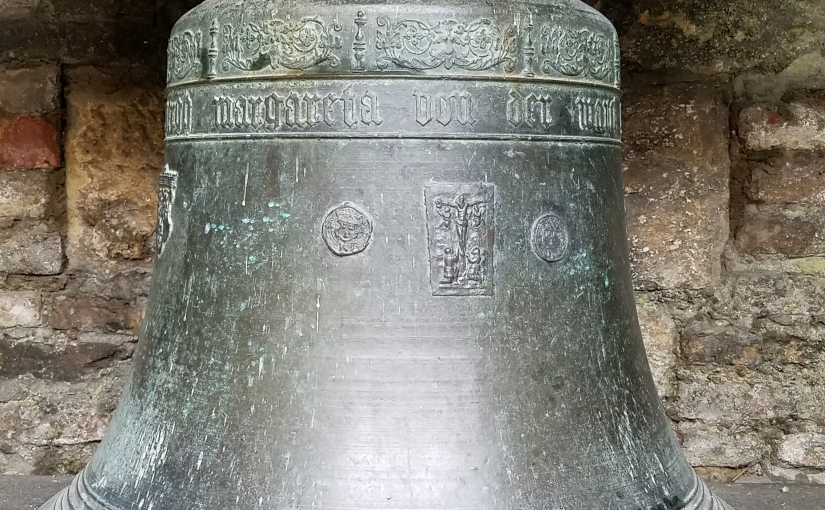 This bell sits in a literal hole in the wall of the Castle of Bouillon. The hole itself was built to be a machicolation. Say what?? 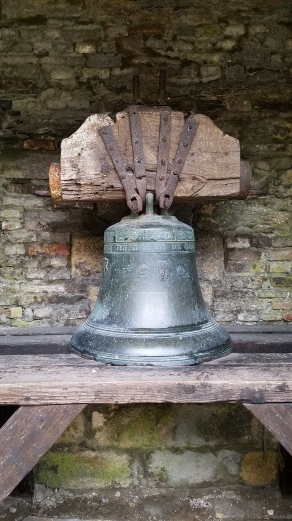 Put simply, a machicolation is open at the bottom so that defenders can drop fun things like stones or burning things on castle attackers. So what is this bell doing here? Not to be dropped, although it would certainly be the last thing a person heard if it fell on them! It was originally housed in St. John’s Chapel, which stood nearby in the center of the castle.*

According to the tour guidebook, the bell is inscribed with the year 1563, and “is made of such high quality silver alloy that, when struck, it sounds for almost a minute.” In researching the process of making these bells, I found that silver does not a good bell make! Perhaps something was lost in translation of the guidebook into English?

Large bells such as this used for church bell towers were made of an alloy of copper and tin, in a four or five to one ratio. Sometimes a bit of zinc and lead wes included in the mixture, but silver is not as resonant as the bronze alloy and would not have produced such a clear, long-lasting peal.**

Whatever the actual composition of this particular bell, the fact that it is made of a metal alloy by definition means that the metals were melted and mixed together. They were then poured into a mold to be shaped as desired. Sometimes new bells were made by melting down old bells and remolding them. After being poured into the mold, the metal was allowed to cool until hard and set. The next step was to test its tone. If the peal of the bell was not satisfactory, it would be tuned by either chipping material away from the inside or along the bottom lip. A later method involved the use of a lathe, and having material shaved off with steel cutters.

Life as an Alloy

The process of making church bells can be compared to the life of a follower of Christ. When we surrender our lives to Christ, we give him control and submit to his authority. Our autonomy dies and who we are is united with Christ to become something, or rather, someone new. The Bible puts it this way: “Anyone who belongs to Christ has become a new person. The old life is gone; a new life has begun!” (2 Corinithians 5:17 NLT) We no longer belong to ourselves (1 Corinthians 6:19-20). We may have been cooking pots or candlesticks, but when united with Christ we can now be used for ringing out his glory here on earth!

If you are a follower of Christ, can you look back and see the change that happened when you surrendered your life to him? Thank him for his grace and mercy in adopting you into his family!

God uses the tuning process on us throughout the rest of our days. We won’t be ringing in perfect pitch or tone this side of heaven, but imagine what we’ll all sound like there together!! Until then, God’s chisel of discipline is at work. He may use his Word, his Spirit, life circumstances or people around us to bring us closer to harmony with the symphony he has written for us. The process may be painful, but in the end brings life.

“He said, ‘My child, don’t make light of the LORD’s discipline, and don’t give up when he corrects you. For the LORD disciplines those he loves, and he punishes each one he accepts as his child.’ As you endure this divine discipline, remember that God is treating you as his own children. Who ever heard of a child who is never disciplined by its father? If God doesn’t discipline you as he does all of his children, it means that you are illegitimate and are not really his children at all. Since we respected our earthly fathers who disciplined us, shouldn’t we submit even more to the discipline of the Father of our spirits, and live forever? For our earthly fathers disciplined us for a few years, doing the best they knew how. But God’s discipline is always good for us, so that we might share in his holiness. No discipline is enjoyable while it is happening—it’s painful! But afterward there will be a peaceful harvest of right living for those who are trained in this way.” (Hebrews 12:5-11)

I haven’t met anyone yet who gets excited about being disciplined by God. It’s no fun at all! But there is so much good that comes out of it for us, and then for those around us, when we submit to it and let it have its way in our hearts.

Have you been through seasons of discipline that brought about positive outcomes in your life? Thank God that he cares for you enough to get involved in your life and in your journey!

The LORD is compassionate and merciful, slow to get angry and filled with unfailing love. He will not constantly accuse us, nor remain angry forever. He does not punish us for all our sins; he does not deal harshly with us, as we deserve. For his unfailing love toward those who fear him is as great as the height of the heavens above the earth.

*The hole at the bottom of the machicolation was closed up and the bell placed there by the Dutch in 1824 when they tore down the chapel in order to build barracks. The castle and surrounding duchy were only in the hands of The United Kingdom of Netherlands for 15 years, from the second treaty of Paris in 1815 until 1830. In 1830 Belgium became a sovereign state, and Bouillon was integrated into the new country.

**Want to know more about these bells? Read Bells : their history, legends, making, and uses by Satis Coleman (1928).