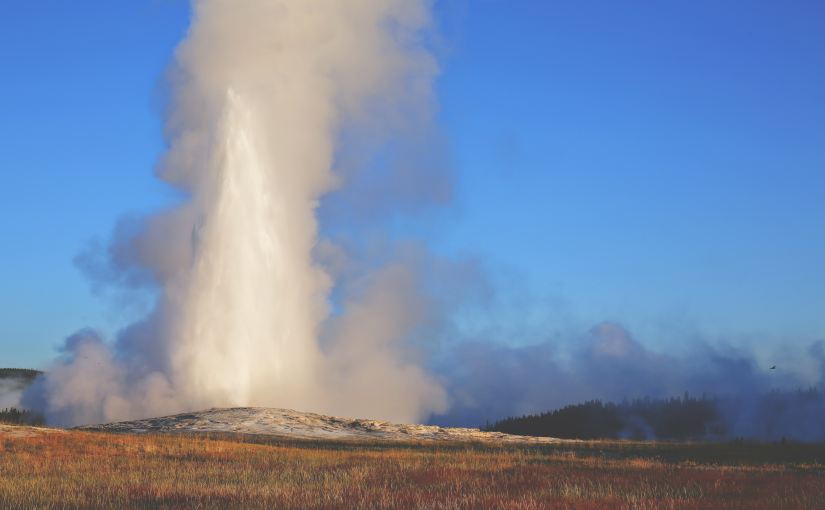 How many people get all choked up when witnessing Old Faithful, the most well-known geyser in Yellowstone National Park? Well, I count as one!! Let me explain…

In September my husband and I visited Yellowstone, and one of the first things we had to see was Old Faithful. I knew this would probably be my only chance to witness this phenomenon, so I chose to be completely present in the moment instead of trying to capture it on my phone.

What got me all emotional wasn’t the geyser itself, but the power behind it.

In order to visit Old Faithful, you have to be standing on top of a VOLCANO. Just how safe does that sound?? Not only that, but the power below the surface that blew its top thousands and thousands of years ago is still at work, producing a great number of other amazing features found throughout the park.

I wrote before about thermophiles, strange organisms that live in the extreme heat inside some of Yellowstone’s hot springs. Old Faithful’s temperatures at the vent have been measured at 204°F (95.6°C), while the steam has reached temperatures above 350°F (177°). That’s hot enough to bake a cake.

But what makes it so hot? All of that heat comes up from shallow magma chambers heating up ground water. It’s hot enough down there to partially melt the rocks beneath the surface! Magma could be as little as 3 miles (4.8 km) away from the ground surface. Does that sound far to you, if we’re talking about molten lava that has the potential to spew out of the ground??

Another feature Yellowstone offers is a host of mud pots. These are formed when steam from below the surface rises and heats a small amount of water on the surface. Hydrogen sulfide gas feeds microbes, which turn it into sulfuric acid. When combined with the acid and hungry microorganisms, the hot water breaks down the surrounding rock into clay and mud. What looks to be a boiling hot feature is not quite what it appears, although it’s close! Water boils at 212°F (100°C), while these mudpots are generally a few degrees cooler. They are near 192°F (89°C). I know, not that much different, but not hot enough to boil!

The bubbles are caused by escaping gases, which have a simply lovely rotten egg smell.

Geysers, hot springs, and mud pots are all really fascinating and all, but there’s more. The ground over the shallow magma moves up and down (ever so slowly), and these uplift and sinking episodes have been measured since 1975.

Now here’s what got me all choked up. When you stand watching Old Faithful erupt, you’re only seeing a teeny tiny glimpse of the power simmering beneath your feet. You can’t see the magma chambers heating up the water and gases down below, but you know they’re there–geologists say so!

Why does that set my heart all-aflutter? Because I have always been power hungry, but maybe not in the way you might think. I love the sound of fighter jets flying overhead. I love crazy, booming thunderstorms. I get excited about hurricanes, and love to see what they do to the surf at the beach. I love blustery blizzards that snow us in for days.

What exhilarates me is the knowledge that no matter how powerful something in this life is, it can never compare with the power of my Creator.  Our great God is able to do more than we could ever imagine.

“Now all glory to God, who is able, through his mighty power at work within us, to accomplish infinitely more than we might ask or think” (Ephesians 3:20 NLT).

He created all that we see and don’t see (like magma chambers, among other things!) with the power of a simple word.

“Christ is the visible image of the invisible God. He existed before anything was created and is supreme over all creation, for through him God created everything in the heavenly realms and on earth. He made the things we can see and the things we can’t see—such as thrones, kingdoms, rulers, and authorities in the unseen world. Everything was created through him and for him.” (Colossians 1:15-16).

God is concerned with and involved in his creation, and He cares for us.

“He made heaven and earth, the sea, and everything in them. He keeps every promise forever. He gives justice to the oppressed and food to the hungry. The LORD frees the prisoners. The LORD opens the eyes of the blind. The LORD lifts up those who are weighed down. The LORD loves the godly. The LORD protects the foreigners among us. He cares for the orphans and widows, but he frustrates the plans of the wicked” (Psalm 146:6-9).

If only we could remember how mighty our God is, maybe it would help us to keep our heads on straight! We need not fret or fear if God is on our side.

In addition to bolstering our faith, perhaps remaining aware of God’s greatness would help us to stay humble. When compared to him, we are only the mist of the morning, here and then gone. We have no strength that He has not given us, and nothing we do is really all that impressive to him!

“He takes no pleasure in the strength of a horse or in human might. No, the LORD’s delight is in those who fear him, those who put their hope in his unfailing love” (Psalm 147:10-11).

Our Heavenly Father is great and mighty beyond our human comprehension and yet He delights in us, his frail children who are prone to so many shortcomings. He is all-powerful, but merciful and compassionate as well. We are precious in his sight.

And now you know why I got all choked up watching a geyser.

For your kingdom is an everlasting kingdom. You rule throughout all generations. The LORD always keeps his promises; he is gracious in all he does. The LORD helps the fallen and lifts those bent beneath their loads. The eyes of all look to you in hope; you give them their food as they need it. When you open your hand, you satisfy the hunger and thirst of every living thing. The LORD is righteous in everything he does; he is filled with kindness. The LORD is close to all who call on him, yes, to all who call on him in truth. He grants the desires of those who fear him; he hears their cries for help and rescues them. The LORD protects all those who love him, but he destroys the wicked.

Have you called on God lately? He is near, my friend! Trust him with your life today. He is able.

You can learn more about Yellowstone National Park and what makes it so different from anywhere else in the world at the National Park Service’s website.

One thought on “Power Hungry”